This club with 3 beautiful synthetic bocce courts will host 4 groups in this round robin event, starting on Friday night and continuing with pool play on Saturday.  The top 3 teams from the 4 pools will square off in the playoffs on Sunday.  Payouts awarded to the top 6 spots.

Details of the event and contact info to sign up with Mike are in the event calendar.

Today the Southern California Bocce Association released its 2017 Bocce Tournament Schedule.  Mike Pennino with the San Pedro Bocce Club sent it to me this afternoon.  Good luck to all West Coast Bocce Players and those who will be traveling to California this year to compete among some of the finest players in the USA.  Note that included in this list is the Las Vegas Bocce Open, run by Guy and Frank DeSantis, which is coming up soon on 3/24/17 – 3/26/17.  Frank is in SoCal and Guy is in NYC.  The event is limited to 40 teams and the deadline to enter is 2/14/17.  Be good to your special someone this Valentine’s Day and you may get a “bocce pass” to head to Sin City, or just take them along.  There are lots of other activities at the South Point Hotel and Casino than just the bocce event. – Joe Bocce 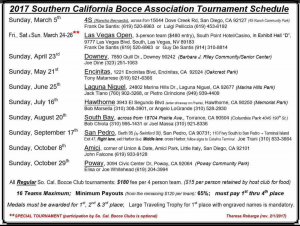 Guy DeSantis and the Mt. Vernon/Yonkers Bocce Club have announced the date of the Annual Dino Vitti Bocce Tournament Fundraiser to be held on April 29, 2017.  Details and registration are in the link to the event listed in the calendar.  If you live in the Northeast or in the immediate New York City area and want to support a fantastic cause, please consider entering a team.